Join me on this useless and odd journey!

There is a subreddit called /r/dadjokes that has been a bastion of bad jokes since 2011. Most of the jokes posted there have the initial bit of the joke in the title and then the punchline in the body (or selftext as reddit calls it).

Then I had this idea.

Let’s just download all of them. Easy right? Right.

There’s a python library called psaw which is a wrapper around the pushshift.io API’s

With that library I could setup something like this.

I ran this, saw it was giving me sensible results, then I set it to fetch a million jokes and went to get dinner.

I arrived back to a script that had finished running.

Obviously the first thing I had to do was to run all the jokes through a markov chain generator. I used markovify for this because it’s the quickest way. I even used their “Basic Usage” example almost verbatim.

Ready to read some markov chain generated dad jokes? Most of them are bad. The ones I picked here were the ones that made sense and none of them have a punchline.

Why washing machine instead of giving me cannons. Things didnt work out.

Knock, Knock. Our local TV weatherman broke both her arms?

What the difference between a piano, and an empty plate in the knees, and naturally, he was Finnish.

Any guy who invented the knock knock joke, shouldve been a post earlier about the wheels.

Dad: Sure, wheres the punchline?

Most jokes have a similar structure. Setup and punchline.

Let’s look at a common joke.

How do you find Will Smith in the snow? You look for fresh prints!

So this joke starts with a common setup. “How do you…” and then the punchline is the last couple of words, here it’s “fresh prints”

We might get somewhere if we only look at the first three words of the joke. But first we need to cleanup the text.

I created a simple class to create some structure to the joke.

And then I read in the jokes.txt file generated before to create an array of jokes.

You’ll see here that I treat the setup and punchline as the same string, it’s not a very reliable seperation to look at title and selftext, so I combine them.

To cleanup the text I use a few methods.

I tokenize the joke using nltk.tokenize.word_tokenize

And lastly I use nltk.stem.snowball.SnowballStemmer to stem each word. This helps immensly when you want to group together similar sentences.

When this is done, the first three items in the list stemmedJoke are the cleaned up first three words of the joke.

Let’s join those words together, print them out and count the occurance of each triplet.

This is the stemmed version, which explains why one of them says “differ” and not “difference”

What if we do the exact same thing but for the last 3 words of the joke? Here is the top 20 most common with a version of the joke/jokes below each entry.

Some of the jokes are impressively copy pasted, to the letter.

Here’s "I dont always tell dad jokes... ...but when I do, he laughs" but I’m only searching for "he laughs" 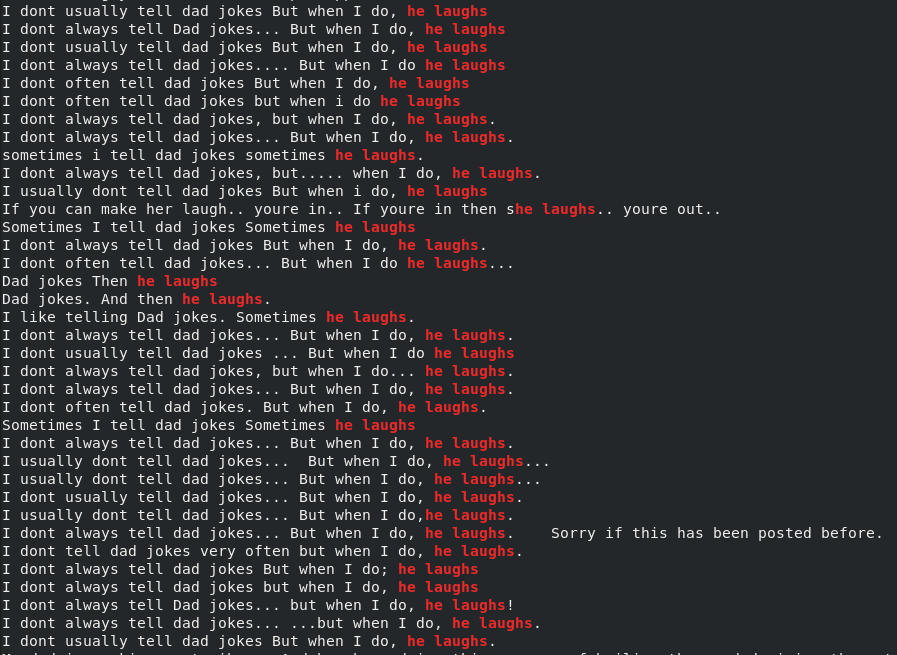 Yeah, it has been posted before, sorry.

I don’t think there is one, this was mostly for me. If you want the data set, yell at me on twitter and we’ll figure something out.