What’s a nap between friends?

I had this silly idea today. What if you had a Worker class in C++ where you would interact with them like this.

So a worker that has it’s own thread(s) and it’s collecting data given by someone else but it’s technically asleep. Then you wake up the worker, and after it’s been woken up it performs the work. We then check if the worker is back to being asleep because then the work is done.

It’s the real world equivalent of putting a bunch of boxes in front of a sleeping worker, then yelling “Naptime’s over!” and then waiting for them to finish working.

Here’s a quick implementation I did just before writing this blog post. Assume it has errors and threading problems (at least tsan and ubsan didn’t complain).

The comments are mostly for people reading this blog post, not as normal code comments.

The header is pretty straight forward and I liked this idea of a bed. The data doesn’t matter much, it’s a representation of something we do.

Here we have the constructor and some of the utility member functions. They’re a relatively basic use of condition_variable and locks but can be illustrative for people who haven’t used them much.

Then we have the work related functions. Data in/Data out. Here ‘work’ is us adding all of the numbers in the vector and then clearing the it.

Then we have the actual thread loop.

Most of it ended up being vanilla uses for mutexes and condition variables but a good exercise anyway. Here is an example output where I added some print statements for each of the steps (x is main thread, o is worker thread). 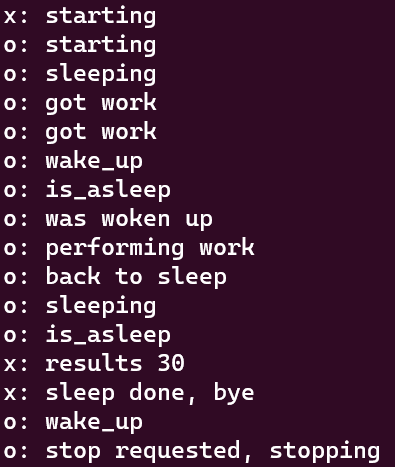 Well here’s the point I wanted to make. I had this idea today. “What if there was a std::nap for thread workers?” then that turned into “How would an interface towards such a worker look like?” and “Can I make the interface look like someone waking up a sleeping worker?”

Having an idea, thinking about it’s execution, trying to come up with a solution. This is a very fundamental part of practicing to become a better programmer.